‘If love could have saved her, she would have lived forever’

On Wednesday 30th August 2017 Mae Mor laid down to sleep in her night enclosure in the early hours of the morning and slipped into an eternal rest. Tomorrow it will be 1 week since her passing, it’s taken me time to find the words to write this piece because the tears just keep flowing.

Back in March we introduced you to Mae Mor for the first time, we wanted to bring Mae Mor home to BEES so she could get the love, care and freedom she deserved. We met Mae Mor 4.5 years ago working as a trekking elephant in a camp in the north of Chiang Mai. She was underweight and suffering from poor digestion. At the time the camp owner was not very welcoming and we were not able to get information on her owners. We left, but never stopped thinking about her.

We were finally able to track down the owners earlier this year who told us that they were teachers and simply did not have time to look after an elephant, which is why she was staying in the camp. They said they would be honoured if we could take her to retirement, where she would no longer work and could receive the love and care she needed. Mae Mor had become too weak to work and was left chained in a field in the scorching hot sun. Mae Mor, who was aged at roughly 70 years old, was severely underweight, her teeth very worn, was malnourished, covered in abscesses & weeping wounds and suffering from a number of health problems as a result.  She had been placed with an inexperienced young Burmese Mahout that was scared of her and felt he needed to use weapons to protect himself. 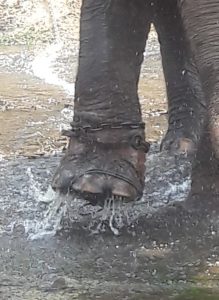 Mae Mor was forced to wear a spiked bracelet in the camp. 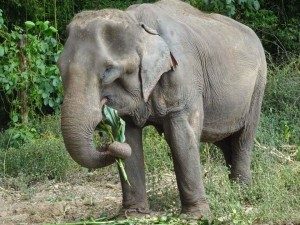 Mae Mor at the camp before her rescue

We were absolutely horrified by her condition and we knew we had to try to save her. There were a couple of people that made the passing comment that we were wasting our time and energy, even making the suggestion we should help younger healthier elephants that would live longer. This upset us greatly. Why? Because we are an organization that believes all lives matter and that all lives are equally as deserving. We knew we had to help her, we couldn’t leave her to perish in the scorching hot field, covered in wounds, not getting fed an appropriate diet and left to spend her nights in pain, alone. She was not going to be forgotten.

March 27th 2017 was the day our poorly Mae Mor was rescued and moved to BEES. 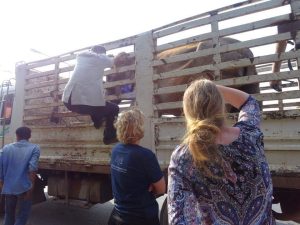 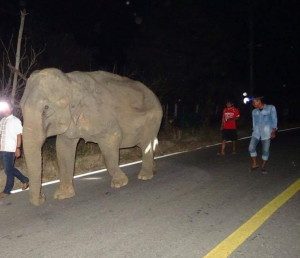 Mae Mor on the road to freedom

Mae Mor arrived at BEES in the late evening but by the morning of March 28th, for the first time, this sweet, frail, old elephant was able to be chain-free and had the ability to make her own choices and just be an elephant. She was so highly strung and it proved difficult to treat her in the beginning because she was confused, weak and in pain. She had no idea who we were and what her new life was all about. Her enclosure became her safety net and despite leaving the gate open for many days she stayed inside the enclosure,  too afraid to explore. After about 3 weeks she started to build the confidence to investigate past her enclosure and soon after was going out on forest walks and exploring the grass fields. She enjoyed spending her days dusting and mud bathing and doing all things elephants should do. She would return to her night enclosure in the afternoon to specially prepared food treats designed to help with her digestion and absorption. While she enjoyed eating these treats she learned to trust her caring mahout and began to accept treatments without too much fuss. Her wounds and abscesses were able to be cleaned daily and she started to heal.

Thong Dee, another elderly elephant retired at the sanctuary, tried to make friends with Mae Mor, but, in the beginning she did not allow her to get too close. She would move away very quickly. Over time Mae Mor allowed Thong Dee to stand closer and they would often be seen in the fields only metres apart. 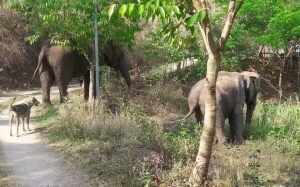 On August 9th, 2017 she had spent the day out exploring along the stream and forest edge with her mahout following her to keep her safe. When she returned she was seen sneaking a piece of sugarcane by the volunteers. About 15 minutes later she began to show signs of discomfort and started regurgitating. She was taking water in her trunk and spraying the inside of her mouth constantly, then spitting it back out. She went off her food and she continued to regurgitate anything she put in her mouth and it became very clear that she was in a lot of trouble. The veterinarians from the TECC (Thai Elephant Conservation Centre Hospital) were called and drove out to attend to her. Based on her symptoms it was diagnosed that an esophageal obstruction was causing her great discomfort. Under the guidance of TECC veterinarians, our Vet Nurse Diana and our team started treating her with antacids, anti-inflammatories, pain relief,  IV and rectal fluids, support therapy, laser therapy, electrolytes and vitamins to help keep her body’s needs in order. We spoke to a number of experts, both locally and internationally. The prognosis was not good. Due to her age and already compromised condition she had become anaemic and blood work showed she had kidney disease. We worked around the clock to ensure that Mae Mor was getting the best care possible and to hopefully get her past this. The Thai veterinarians believed she was too old and the risks too high for sedation to explore further, but suggested we use pressured water flushes in her mouth and continue IV and rectal fluid therapy so she would stay strong in the hope her body would be able to resolve the problem itself and push the obstruction through. We were repeating her blood work every few days to make sure that we were keeping on top of her condition. 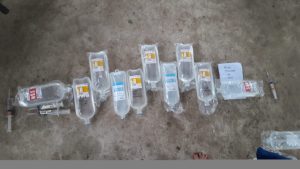 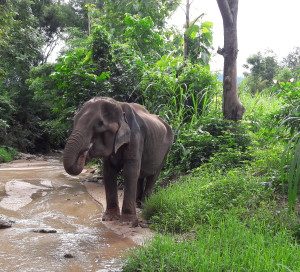 Mae Mor enjoying a walk between treatments and Support Therapy

After 12 days of no improvement and countless discussions with all our veterinary contacts, we felt that we needed to make changes to the treatment plan so that she could have more quality time and we could reduce her stress levels. We started our days earlier and finished later, doing fluid therapy and medications in the early hours of the morning then freeing her to walk and explore, then we would bring her back in the late afternoons for further fluid therapy, more medications and treatments. Incredibly her blood work started to improve, her kidney enzymes were showing improvements and she started to try to eat again. Her will to live blew the minds of many veterinarians and our staff, she was so full of fight, a fight we have never seen before. 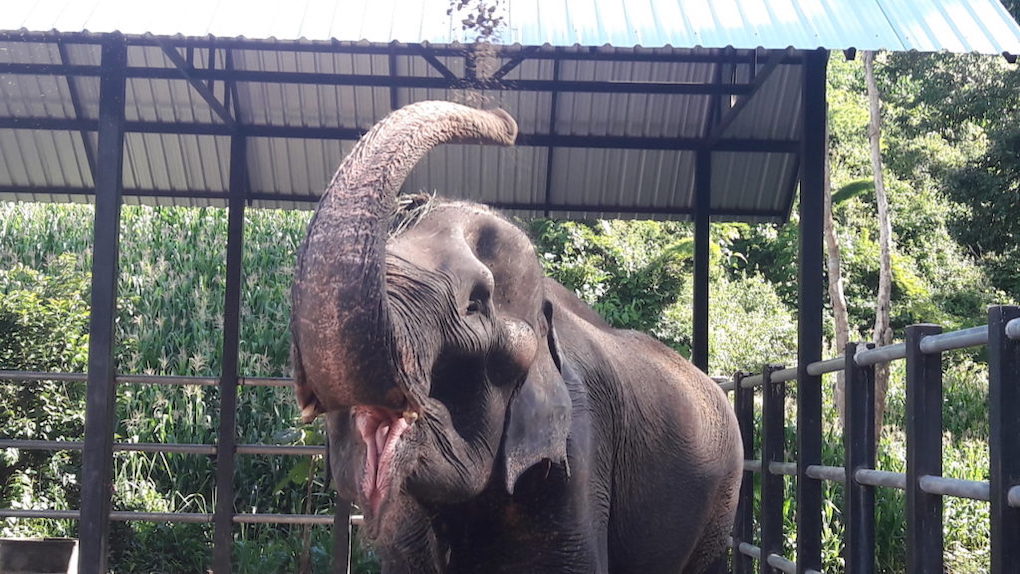 Mae Mor having a dust bath in her enclosure

On August 29th 2017, 20 days after she started showing distress, she had her morning fluid therapy and treatments and then spent the day out wandering the sanctuary, the same as the previous few days. That afternoon something beautiful happened. She took a stroll up the mountain that overlooks BEES with her mahout Aum following her in awe of her strength and will. She stood, resting her trunk for nearly an hour by the grave of Boon Yuen, an elderly elephant that had died there over two years ago.

She returned to her night enclosure for further fluid therapy, medications and treatments

Mae Mor laid down to rest in the early hours of the morning on August 30th 2017. She closed her eyes as she lay in the soft sand bed of her night enclosure, she drifted off into a heavy sleep that would last for eternity. 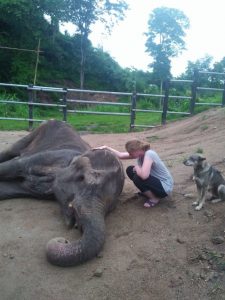 We were able to confirm Mae Mor was suffering from an esophageal obstruction amongst a number of other health complications. Her increasing anemia and other corresponding blood work sadly could not rule out cancer.

Mae Mor was a remarkable elephant, she had endured so much pain in her long life, her worn, frail body had been through far too many hardships. We had no idea 4.5 years ago that we would be able to bring her home to BEES. Although very compromised, we had watched her go from a highly strung elephant to an elephant that was gaining a lot of trust with her new human caretakers. In a short amount of time she had built a lot of confidence and enjoyed strolling through the forest with her head held high, having the ability to just be an elephant. As sad as we are to have lost Mae Mor, she stands by what we believe in, that every life deserves a chance and no one should be left behind, Mae Mor will always be in our hearts, never to be forgotten. 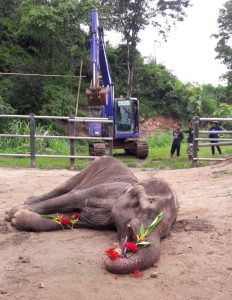 Mae Mor at eternal rest in her night enclosure, the tractor had arrived to move her to the burial site.

Mae Mor was laid to rest with a Buddhist Burial ceremony. During the preparations and while we were waiting for the Abbott monk to arrive a beautiful dainty yellow butterfly flew around her body, maybe it was Boon Yuen’s embrace. 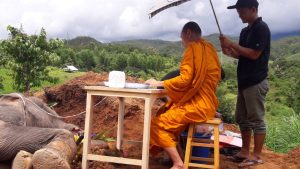 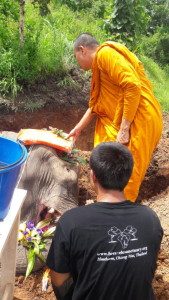 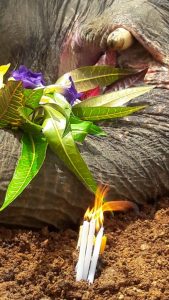 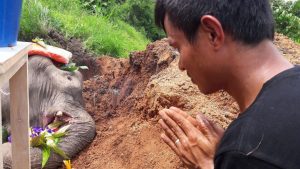 Her soul was blessed and she was buried on the mountain where she had stood with her mahout the afternoon before. Her mahout felt that she gave him a sign, that she had chosen the spot she wanted to be – up on the hill beside Boon Yuen. There are now two beautiful wise old souls at rest on the mountain that overlooks BEES. 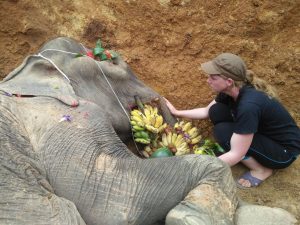 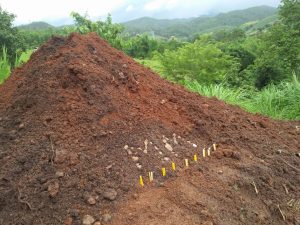 Mae Mor is buried on the mountain next to Boon Yuen, we now have two wise old elephants watching over BEES

We would like to say a very big Thank you to Dr. Erica of WAWI Outreach (https://www.facebook.com/WAWIoutreach/) for making two seperate trips to visit us with donations of supplies for Mae Mor and offering her support and advice. 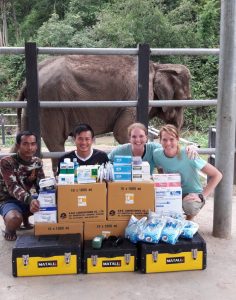 We would also like to thank the Thai Elephant Conservation Center Veterinarians for their donations and their guidance and for always sending their mobile clinic veterinarians out when needed and coming with donations and supplies. We are grateful for their constant medical support and guidance for the elephants at BEES and for the service they provide for Asian Elephants across the country.

Lastly, but just as importantly, we would like to Thank all of our supporters who donated towards Mae Mor’s rescue and on going medical care. With your help we were able to give Mae Mor the chance to be an elephant again. 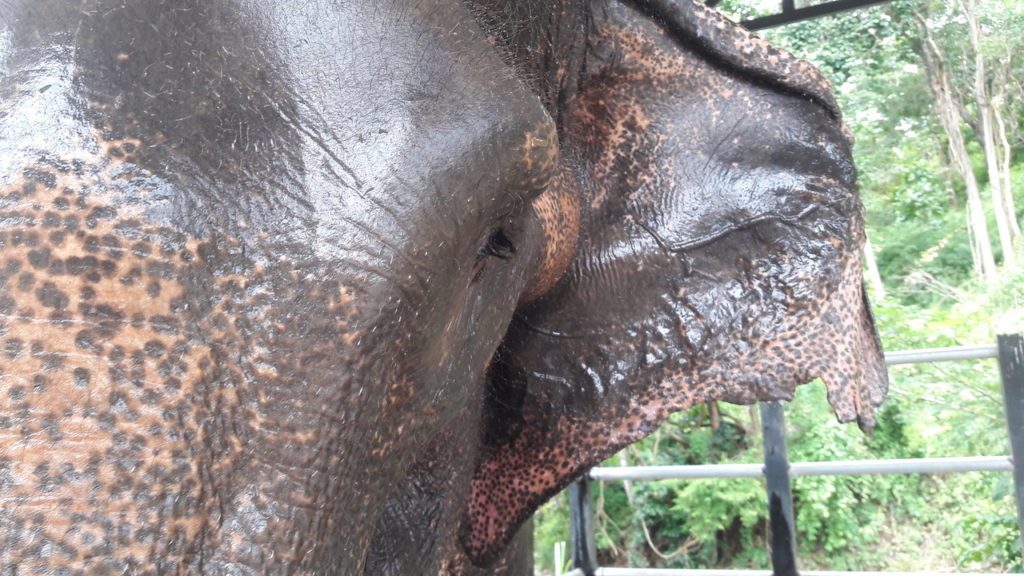 If you would like to support our work, please consider making a donation so we can continue to provide sanctuary to these magnificent animals.

Together we can make a difference!

Emily and The BEES Team xx